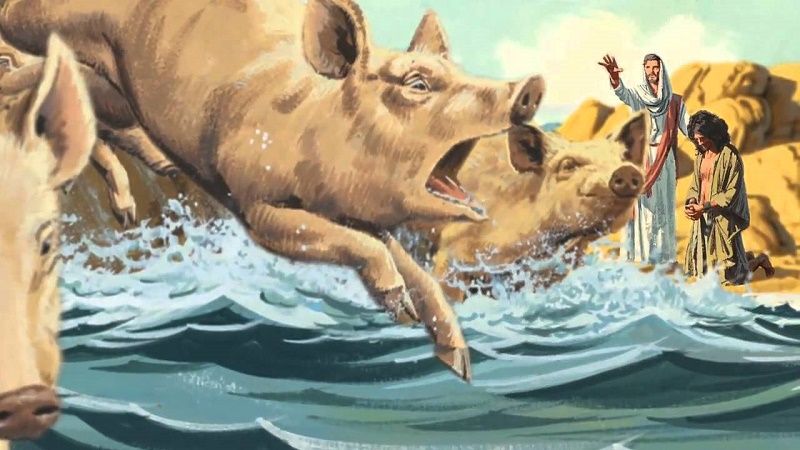 English version: The Cry of the Brother at Gadarenes

The graves were his home
Demons were his siblings

The moment Jesus set foot on
The shores of the Gadarenes, it was like a withered tree
That this man caught Jesus’s eye

Legion refers to a division of Roman origin
Consisting of a battalion of 3000 to 6000 warriors
It is indeed surprising that these many demons
Unanimously resided in him!

Those having a sound mind
Are not able to have oneness in the church!

Jesus, Son of the most high God
He cried aloud and gathered the townsfolk

“Even the demons believe and tremble! ” is
What became a fact

The current Christian community
Enters the church
And also desires to leave quickly in that same speed
As a consequence, the yield of righteousness decreases
The stress to the mind increases

After meeting Jesus,
He made a request
On behalf of the satanic beings

At that same moment, the Gadarene brother
Received deliverance.

Remember, even Judas Iscariot had fallen
from a high position onto a stone
and his stomach had burst open

In the same way, Pharaoh and his armies
Were also called into the sea

He came to destroy the works of the devil
It is for this that He gave the orders
Why any surprise on this?

Meanwhile, the herdsmen of the pigs
Incited the townsfolk
And raised them against the Most High

Numerous have already risen
to do such revival ministries

As long as he was tied up
Suppressed
There was no
Uprising by anyone
Neither did Jesus
Tie him up
Nor suppress him
Instead He had lovingly
Made him sit down
As far as he was concerned, before this
He could not even sit properly
In one place

This pathetic condition
is happening in the current generation

Rather than sitting down,
The human mind prefers to run
With whatever comes to the hand

Touching the device every minute
Appealing through WhatsApp,
Looking at the mail, failing
In life, rejecting advice

The demonized brother received a sound mind
The minds of residents became unsound
May be the ones who screamed
Release Barabbas
Crucify Jesus
May have had a connection with
This city of Gadarene!

How did they have the heart to
Show the black flag to someone
Who had conducted a great deliverance festival
Without any money being spent and brought
The breeze of freedom to their town?

In the town of the little foxes rose
The first missionary, the former legion himself

Jesus looked at him;
Go back to your city and your home
Tell them what the Lord came down
And did for you

For the deliverance received, it is not the heart
But the intention that Jesus likes

Decapolis means a group of ten cities,
He was the Pastor for all these ten cities!
Jesus completed His ministry
The boat also set sail
Jesus gladly started
Got into the boat and went to the other side.

The ones who waited on the ‘other side’
It is only they who were on ‘His side’!